Sharon, Moshe. Revolt - the Social and Military aspects of the ‘Abbāsid Revolution (Black Banners from the East, volume 2), 1990. 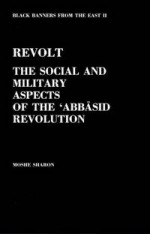 Black banners from the East tells the story of the first revolution in Islam which caused not merely the change of dynasties, but the end of the formative period of Islamic civilization. It is the story of a messianic movement striving and succeeding in establishing the throne of its Caliph-Messiah. The two volumes of Black banners from the East describe the two stages of the revolution from its early Shīʿī roots to the major military victories over the Umayyad army and the establishment of the ʿAbbāsī state. While the two volumes form a coherent study, each one of them is independent and can be read on its own.

Volume 2, Revolt---the social and military aspects of the ʿAbbāsid revolution, deals with the revolt itself and with it social and military aspects. It describes the rather short but decisive phase of the change that an ideological movement undergoes in order to be able to achieve its political Goal - capturing the government. The book follows step by step the emergence of the Hāshimiyyah-ʿAbbāsiyyah from hiding into the open political and military arena, under the leadership of Abū Muslim,  the character of the army it created, its social origins, its structure and the institutions which supported it. The success of the ʿAbbāsī movement relied completely on the special features of this military power whose creation revolutionized, as a by-product, the whole military system in Islam.