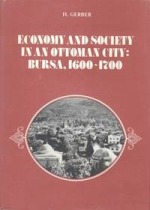 This book is devoted to the social and economic history of the western Anatolian city of Bursa in the 17th century. During this period, Bursa was a major Middle Eastern center. The study examines the economic activity of the city (commerce, crafts and banking) and attempts to evaluate the role of the waqf in this sphere. The author has based himself primarily on legal documents preserved in the city’s archives.

A major concern of this book is whether a decline occurred in the Ottoman Empire at this time. The author concludes that this is primarily true for the end of the century, but that this decline was cyclical rather than long-term. The author also points out that the gap between East and West was not as great as is often assumed.