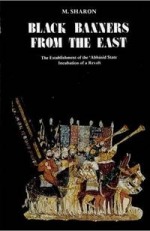 Black banners from the East tells the story of the first revolution in Islam which caused not merely the change of dynasties, but the end of the formative period of Islamic civilization. It is the story of a messianic movement striving and succeeding in establishing the throne of its Caliph-Messiah. The two volumes of Black banners from the East describe the two stages of the revolution from its early Shīʿī roots to the major military victories over the Umayyad army and the establishment of the ʿAbbāsī state. While the two volumes form a coherent study, each one of them is independent and can be read on its own.

Volume 1, The establishment of the ʿAbbāsid state---Incubation of a revolt, describes the clandestine activity of the movement that began after the collapse of al-Mukhtār's venture. It describes the methods, ideology, and system of activity which the members of the movement followed in order to prepare the hearts and minds and create the wide popular support for its goals. The mechanism of the incubation of this revolt is a fascinating story, describing in detail the development of a pure Shīʿī movement, the Hāshimiyya, into an ʿAbbāsī propaganda machine which prepared the revolt.